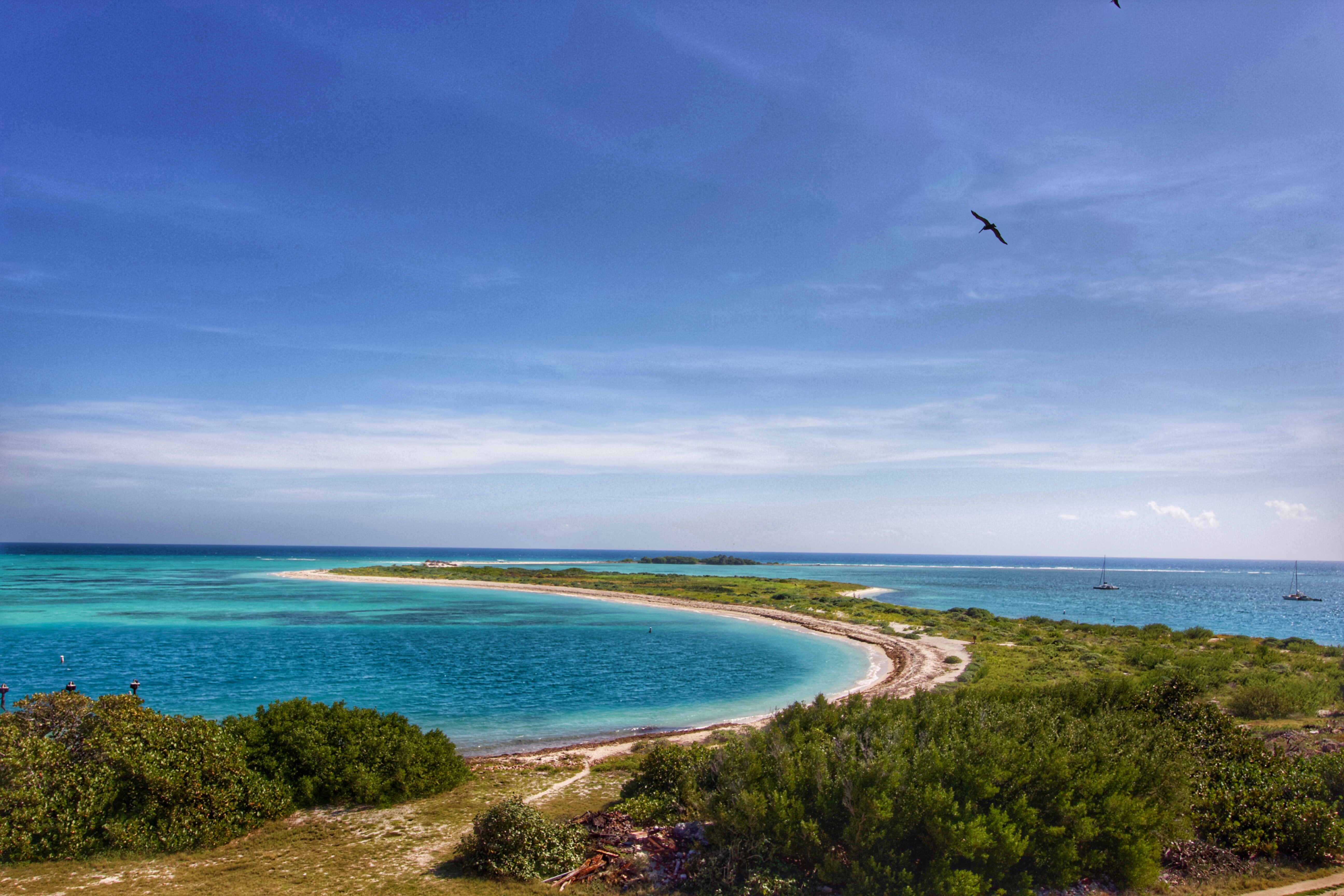 Florida state has three national parks: Everglades, Biscayne, and Dry Tortugas. Everglades NP is well-known for its unique tropical wilderness and ecosystem; 95% of Biscayne NP area is under the sea; Dry Tortugas NP has a massive Fort Jefferson which was the third largest costal fort in US. In overall, these national parks offer completely different views than others.

Miami is the closest gateway to these parks. We flew to Miami and rent a car at the airport. We spent our 1st and 2nd days on Everglades, Coral Castle, Biscayne, and Miami South Beach; 3rd day for driving to Key West; and the last day for Dry Tortugas. I personally don’t like the south beach so I’ll not narrate it in the following paragraphs.

Everglades National Park is located at southwest of Miami. Depending on which visitor center you’re targeting at, the driving time varies. The most accessible visitor centers are Shark Valley and Ernest F. Coe. The former offers tram tours, bicycle rentals, and walking trails. The later one is close to the Royal Palm Nature Center, which provides ranger guided programs and has the most famous Anhinga trail.[1] We directly drove to the nature center and took the Anhinga Amble Tour at 10:30am. The program ran about 50 minutes and was led by a ranger who introduced the wildlife and ecosystem around this area.

Obviously, the Anhinga Trail has an abundant of Anhingas. They’re one of the bird species inhabit Everglades. They’re water birds. They can swim and catch the fish under the water. But they can not stay under water so long since their feathers are not waterproof. The soaked feathers are too heavy to move underneath the water and even to fly. So after preying, they usually stand with their wings spread and expose to the sun to dry their feathers.[2] 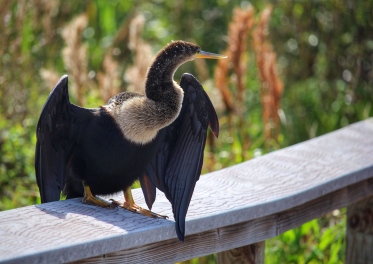 The Everglades has dry season and wet season. The official website says the wet season last from May to November each year. But actually when we visited during Thanksgiving holiday, it’s already in dry season. Dry season is perfect for wildlife viewing when animals congregate at central water locations as water level drops down.[3]

The American Alligators are the rock stars among wildlife in Everglades. The park’s swamp and marsh ecosystem provides a wonderful inhabitation for alligators. During the dry season, they often excavate dens for saving waters in order to use as shelters for themselves and even for other animals. Alligators were listed as an endangered species earlier, but were removed from the list lately. It was because hunting became illegal and the alligator farms were built.[4]

Alligators and crocodiles are different. The snout of an alligator is broad and round, while the snout of a crocodile is triangular and sharp with visible tooth. Unlike alligators, crocodiles usually inhabit salt waters. Crocodiles are still listed as an endangered species due to the habitat loss.[5]

Everglades also has a lot of wading birds. One of them we saw was the Great Egret. We were told that it walks with its neck extended and flies with its neck retracted. We also saw a Florida gar fish. What is interesting about these fish is that they can breathe above and under the water. 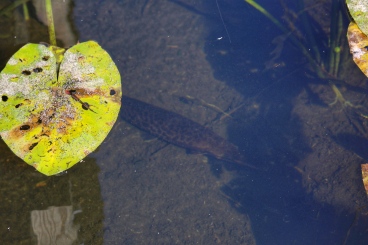 If you plan to visit either Everglades or Biscayne driving from Miami, Coral Castle is just near a city Homestead that you must pass through. Coral Castle was built by Edward Leedskalnin, a guy who was only 5 feet tall and weighted 100 pounds, to memorize his lost love Agnes Scuffs. Agnes accepted Ed’s proposal initially but cancelled it one day before their wedding. She was just 16 years old at that time (10 years younger than Ed), so Ed referred her as his “Sweet Sixteen”.[6] The construction was such a mystery that no one knows how Ed created this masterpiece and it even had been compared with Egyptian pyramids. 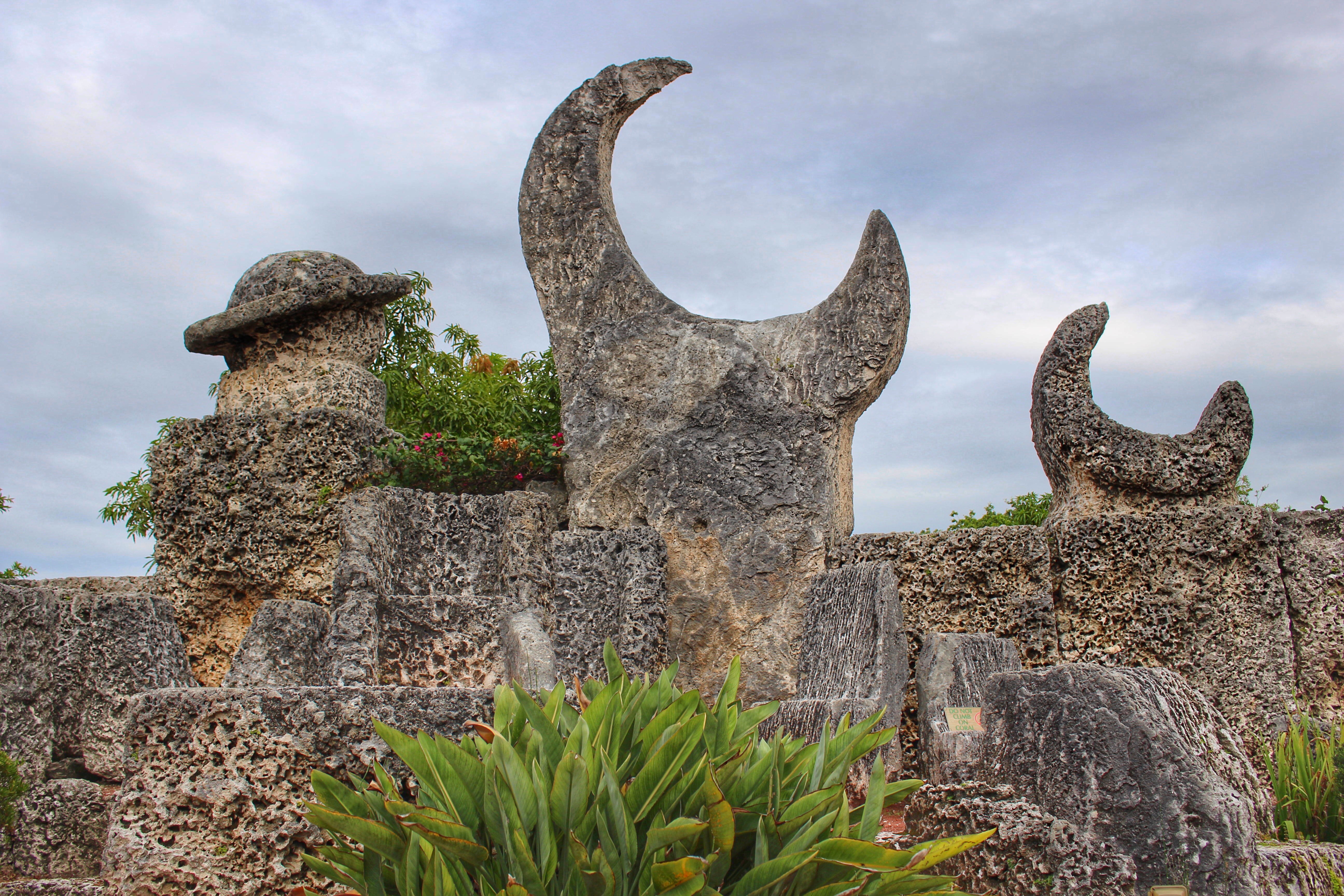 Ed was a creative and smart man. He exerted an artful application of nature. The picture on the left refers to the three reading chairs which share a step foot in the middle. Ed positioned those chairs in a certain angle, so he could use the sun light to read in the morning, at noon, and in the afternoon. The similar concept was also used to build the sun couch (right picture). He built a flat rock bed with three raised pillows to expose to the sun during different time in a day. 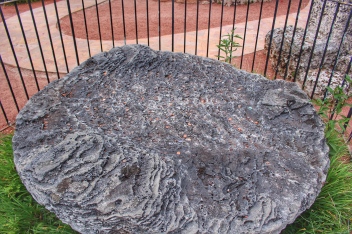 Another masterpiece is the Polaris Telescope. It consists of two parts: the inner wall with a spy hole on it, and the outer tower with a round hole which was divided by wires into four quadrants. The north star can be seen every night throughout this telescope, and the star moves around the quadrants when seasons change. 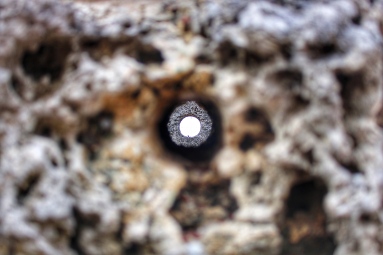 As I mentioned above, 95% of Biscayne National Park is underneath the water. So without doubt, the most valuable and fun activities are snorkeling and scuba diving. Due to the weather at the day we visited, we had to give up the snorkeling plans and took a boat tour to Boca Chita Key.

The park can be access through Dante Fascell Visitor Center, which is located at bay shore covered by mangrove forest. The park incorporates with Biscayne NP Institute to offer snorkeling, paddling, scuba diving, sailing, island and other special topic activities.[7] The tour doesn’t collect national park entrance fee, and the rest of tour fee will go to NP services for preservation purposes.

The Boca Chita Key has a lighthouse and three structures: a chapel, a picnic pavilion, and a stone wall. The lighthouse was built for a business navigation. It can only be visited when a park staff is there. We stood on the top deck and overlooked the Miami skyline.

Mark C. Honeywell was the owner of this key and originally found this place a perfect destination for private resort. They often invited their wealthy friends to this island for parties. Nowadays, the island still offers this opportunity to public for family and friends union. Reservation is needed.

If you bring your kids to this place, remember to take them to the east-side beach. It has the largest and most intact shells I have ever seen.

During our drive from Miami to Key West, Turtle Hospital is one of the places we stopped. It’s a non-profit organization providing rehabilitation services, surgeries and other needed care for sea turtles. The hospital has daily education programs running per hour. I highly recommend this since you’ll learn the missions and history of the Turtle Hospital and have the chance to see some treated sea turtles. Reservation is needed to be made in advance. 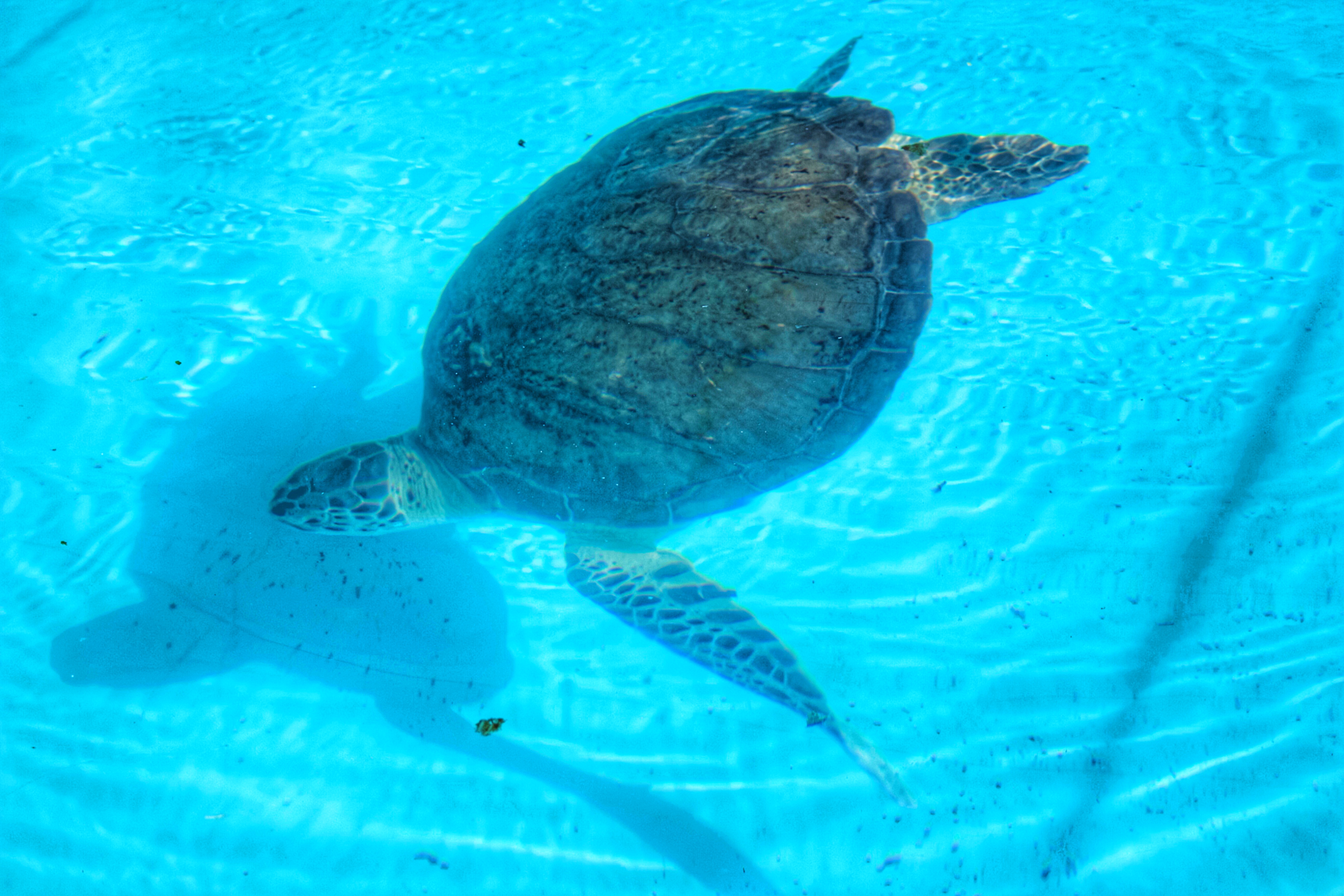 Four main types of sea turtles were introduced by our tour guide. Loggerhead is the most commonly observed sea turtle in Florida. They’re endangered species and were threatened by costal armoring which blocks their way to upper beach for nesting. Large sharks are the only predators when they grow up to juveniles or adults.[8]

The missions for Turtle Hospital are rehabilitation, research, and release. The hospital has several surgery equipment which has been mainly supported by local hospitals and private donations. It has treated sea turtles with various injuries and sickness, including: intestinal blockage by ingesting fishing hooks or plastic bags, entanglement in the fishing lines, shell damage by boat hitting, infection by a kind of virus which causes tumors to grow.[9] The hospital has released 1,000 + sea turtles at different locations. Sometimes GPS trackers were put on them to see how far they go. 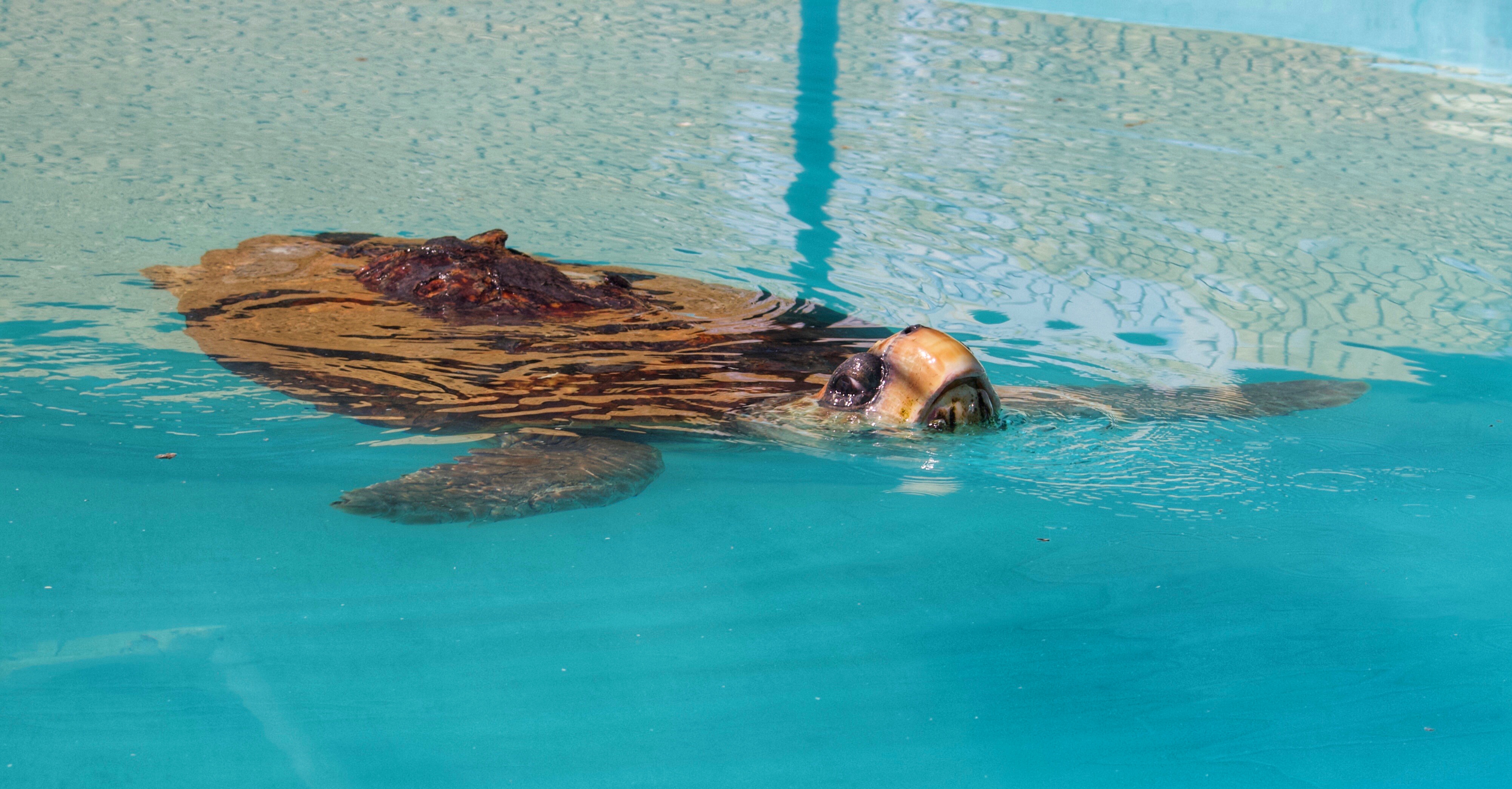 The other place we stopped was Robbie’s Marina. The first thing we tried was tarpons feeding. We purchased some small fish as baits and grabbed in hands, and those tarpons would jump up from the water in a flash of silver then our bait was gone. That’s how they got their nickname as “silver king”. Tarpon is a big sea fish living in the warm waters, primarily Gulf of Mexico. They are prehistoric fish and can grow up to 200 + lbs and live up to 50 years.[10] Please enjoy a video I steal from instagram!

The boat took us to the deep sea where was 4 – 5 miles away from the shore. Two types of fishing rods were available: a regular spinning rod and a bottom fishing rod. The later one was more friendly to non-professionals. We caught four different types of fish: Strawberry Grouper, Yellowtail Snapper, Blue Runner, and White Drum. We released all of the Yellowtail Snappers we got, since the minimum size to keep was 12 inches by regulation. We also released the Blue Runners as we were told they’re not tasty.

Back to the dock, the crew helped us clean, filet the fish, and cooked as an appetizer for our dinner. The photo below has four fish. IT IS REALLY NOT ENOUGH FOR TWO ADULTS! SO REMEMBER TO KEEP MORE FROM WHAT YOU CATCH! 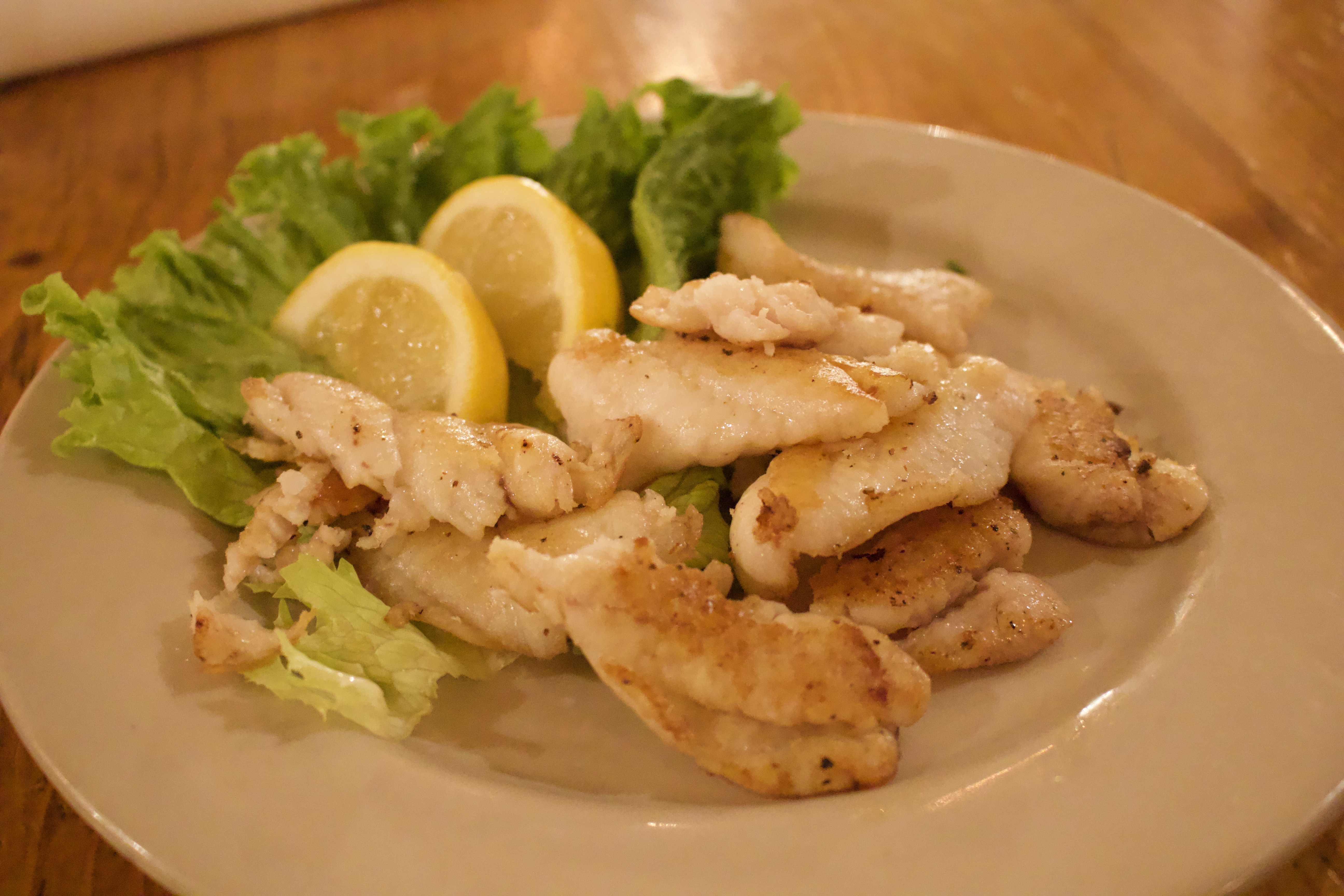 Dry Tortugas National Park is the last thing we had on our travel itinerary. Many people don’t know this place since it’s on an island where is 70 miles west from Key West. Two public transportations are available from Key West to the park: Seaplane and Ferry. If you have enough budget, take the seaplane as it’s time-saving and can avoid seasick. We took Yankee Freedom III as a ferry ride to the park.The entire day trip started at 7:00am and ended at 5:30pm at Key West with 2.5 hours ferry ride one way. Breakfast, continental lunch, and snorkeling equipment were provided.[12] 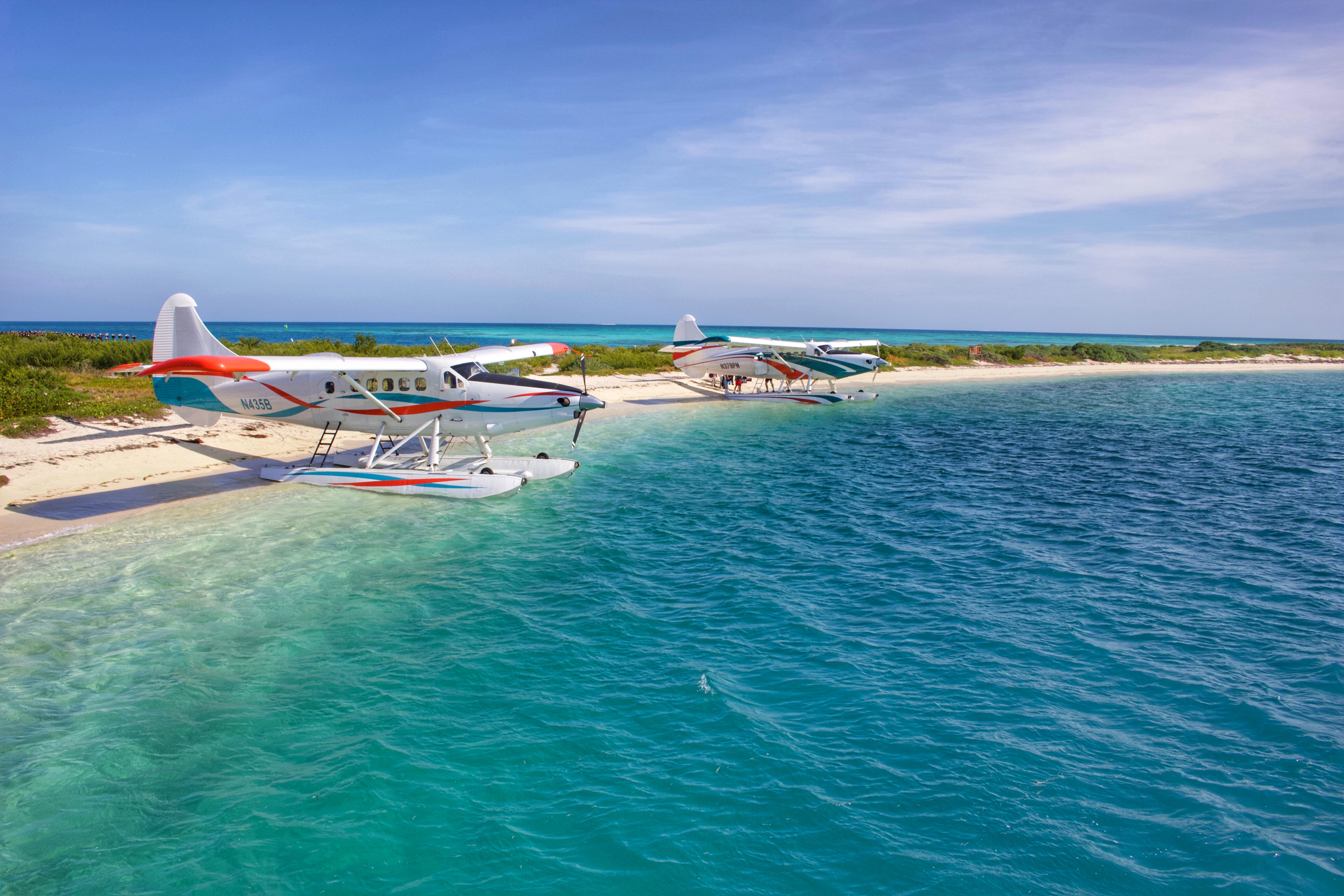 What I’m going to tell is what I learned from the tour and the self-guided tour book.[13] I think mapping its history chronologically might better help the understanding. 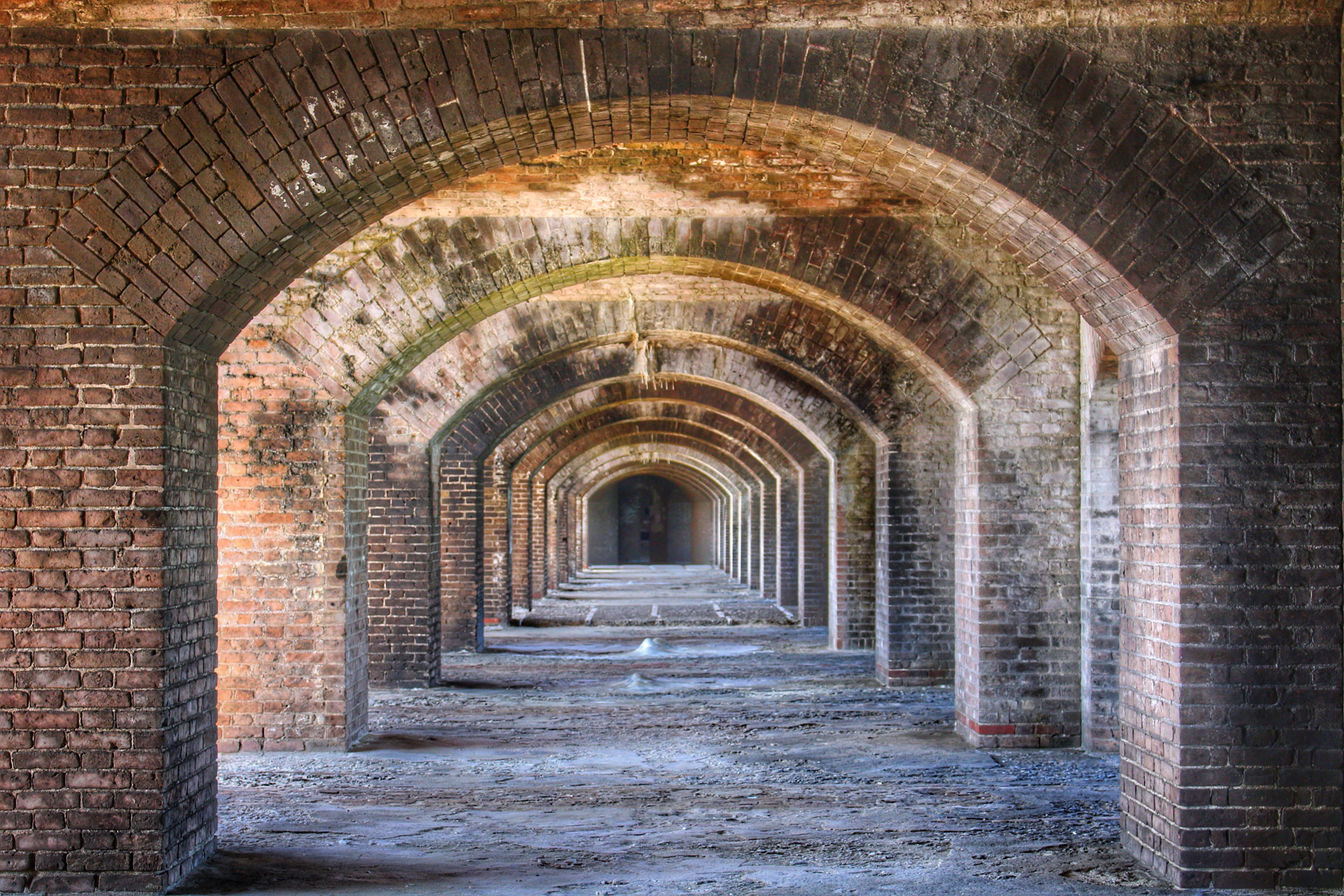 The island doesn’t have freshwater. Nowadays, the staffs who are living on this island use the freshwater collected from rain and convert salt water into freshwater by reverse osmosis. There are two lighthouses. One was damaged by the hurricane, and a new one has been built for navigating purpose to avoid sinking vessels due to shallow reefs. 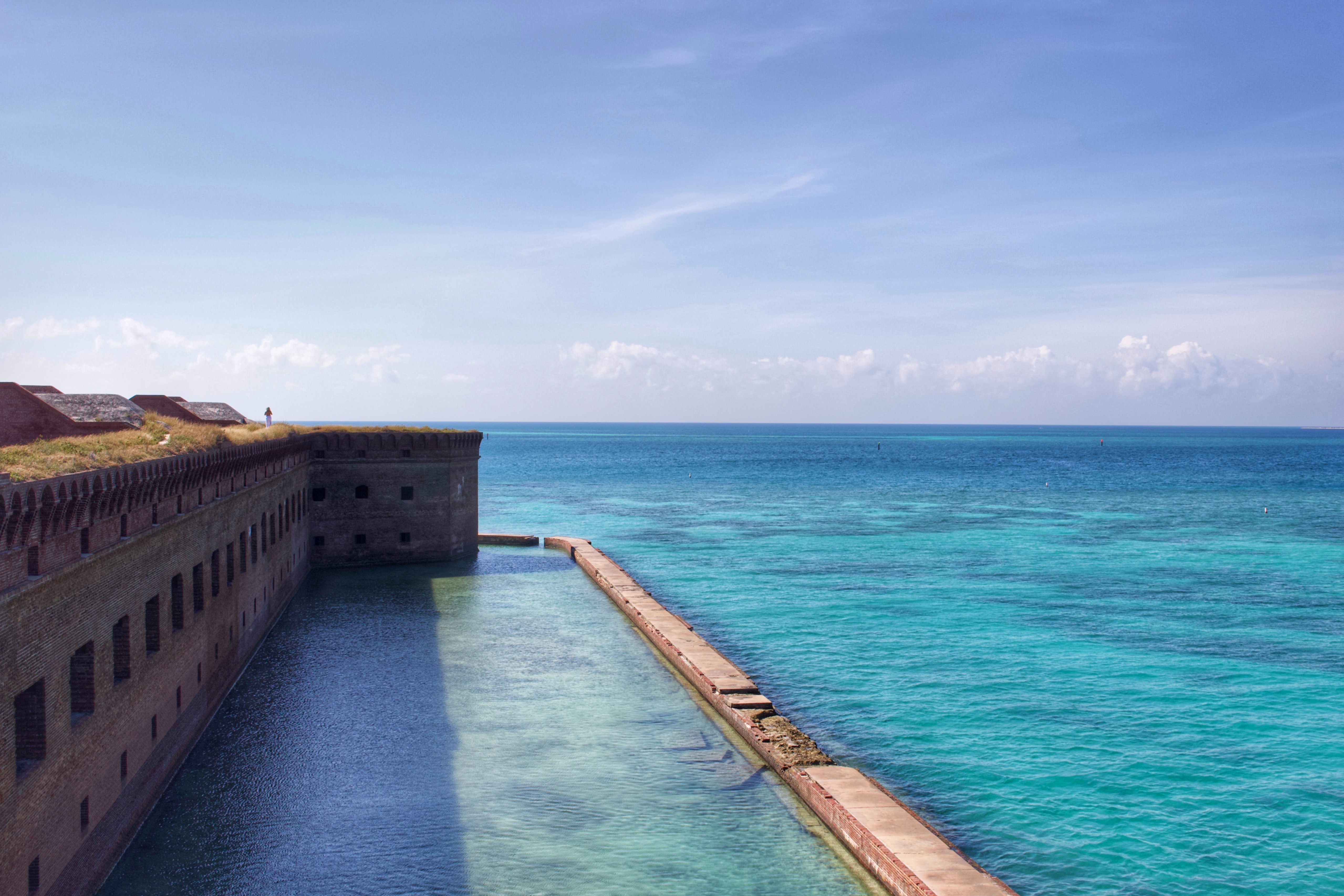