Cincinatti is the departure city of this trip. One tip I got this time was some hotels provided free airport parking package, which allows you to leave your car at the hotels for several days and pick up when you’re back. We booked Cincinnati Airport Marriott for one night in order to catch up the early flight and they offered us a free two-week parking permit and airport shuttle services.

Although Cincinnati airport serves the greater Cincinnati metro area, the airport locates at Kentucky. Each airport has a unique three letter IATA code. For Cincinnati airport (CVG), it’s the abbreviation of the nearby city Covington. Another example is Louisville International Airport (SDF). The code was based on the old name (StanDiFord Field) before 1995, in honor of the former state senator Elisha David Standiford.[1] Check more stories behind the three-letter of your airport here.

Eastern time is 3 hours ahead of Las Vegas, so plan accordingly!

Although I’m not a big fan of this city, I have been here for twice. Since I’m going to visit the national parks around this city, it becomes my transferring stop to provide energy supply and good rest. Many routes could be designed as good candidates for road trips. I visited here in March 2015 and traveled Grand Canyon NP, Antelope Canyon, Lake Powell, and Zion NP in a loop. It was the excellent experience in that trip which brought me here again to visit Zion NP.

For the highlights of this city, I would recommend the buffet and the show. Gambling is not my thing, so I’ll only introduce the history.

It’s an option that you could buy a buffet pass at Caesar Palace to taste six buffets within 24 hours. It could also be purchased with a room package under Caesar hotels. The prices for a buffet pass would differ by weekends, holidays, or seasons. For Bacchanal Buffet in Caesar and Carnival World Buffet in Rio, extra fee would be added.

I watched O show by Cirque Du Soleil last time, so this time I just tried a different one called Master of Illusion. It was performed by five magicians and filled with modern illusions, deception arts, and comedian humors. It was also broadcasted on TV since 2000 and revived by CW featuring new performers in 2014.[2] I bought the discount tickets from Tix4Tonight.

It’s quirky that Las Vegas became one of the famous gambling cities in the world if you think about it’s location. The dry and hot weather usually keep humans away. However, the engineering project of Hoover Dam brought thousands of workers in 1931.[3] Casinos and other types of recreations started to develop in this area to entertain the males. At the initial stage, gambling was not legalized. But later on, legalization of gambling was put into effect as a revenue of the state, in order to relief the economic depression caused by Hoover Dam project and stock market crash. Since then, gambling was booming in Las Vegas which brought lots of business investment and tourisms.[4]

My experience in Death Valley National Park is “First ever, and never”. It was extremely hot and dry which made me very uncomfortable several times during the day. However, I have to say that the natural landscapes there are spectacular. 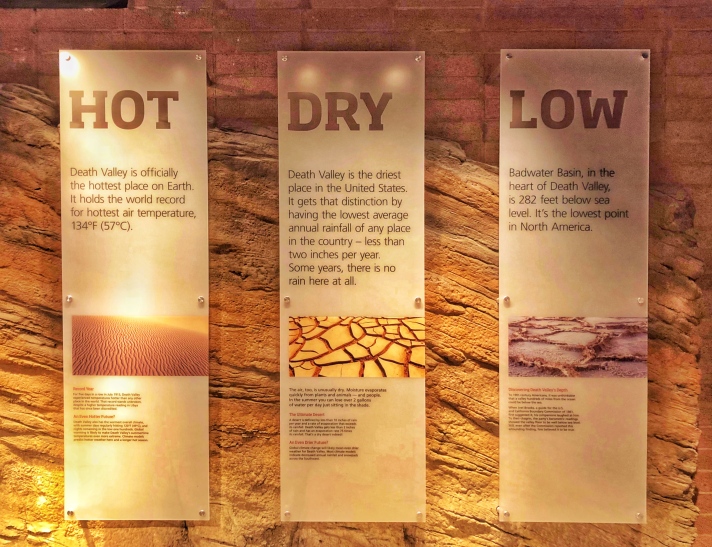 The long narrow basin and its geographic location contribute to the hot and dry climate in Death Valley NP. Since the basin is below the sea level, dry air and heat are radiated back from the steep mountain and trapped into the valley. Additionally, when winter storms move from the Pacific Ocean to the valley, several mountains between them (like Sierra) absorb the moistures which make few moisture left for the valley.[5]

We only spent one day here due to the uncomfortable weather, so we just picked several famous landmarks to visit. Here is the driving route. Mesquite Flat Sand Dunes is highly recommended! There are only three gas stations inside the park: Furnace Creek, Stovepipe Wells, and Panamint Springs (west part of the park). Check the engine temperature and gas periodically! 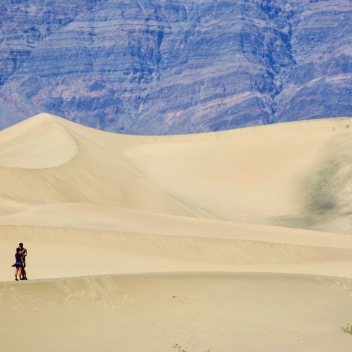 The Kolob Canyons was closed for construction at the time we visited, so the Zion Canyon was the only place we went. We spent four days there: first day biking, two days for Angels landing and Narrows trails, and last day for east Zion. Most visitors choose to arrange overnights in the town of Springdale due to its location and restaurants. But if you’re budget-tight, living in the La Verkin or Hurricane (20 miles west) wouldn’t be a bad idea. Several rental companies are located at Springdale as well. Zion Adventure Company is the one we rent all equipments for this trip. They provide bike rentals, narrows rentals, technical gears, and guided tours for hiking, biking, rock climbing, and canyoneering.

Zion National Park has limited parking spaces. When all parking spots are taken in Zion, visitors need to park in Springdale and take free shuttles to the park. The Zion shuttle usually run from March to November each year. When the shuttles run, no private vehicles are allowed in the park except that you booked the Zion Lodge. The shuttles run on two routes: Springdale and Park (following map). The alternative way to visit park during the busiest times of year is like us: biking! The scenic drive is well-paved and has extraordinary beauty around every turn. We put our bikes on the shuttle to the final destination, and enjoyed a very relaxing downhill all the way back to the town (Trailhead). 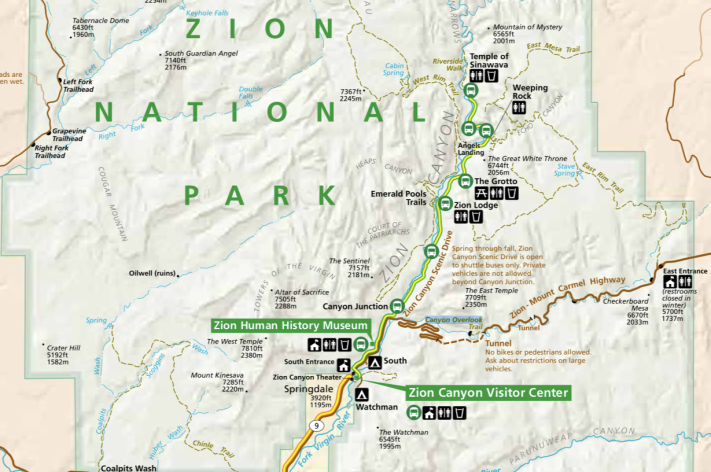 I’ll share my experience in the order of the shuttle route.

Got my NP passport stamped here. If you plan to experience the wilderness, don’t forget to stop at the visitor center to ask rangers for tips. They’re well-trained, professional, and could provide you great information, especially if you’re going to do something really dangerous. Pa’rus trail, rated as easy, is a 3.3 miles round trip trail. It’s the only trail in Zion allows pets and bikers. Following the Virgin River, this trail starts form Sound Campground to Canyon Junction (3rd. shuttle stop). I highly recommend to walk/bike this trail at sunset as the sun illuminates the Watchman and reflects incredible colors.

The 22 minute video (every half hour) provided me a great overview of the prehistoric settlements, development of the canyon, implementation of the shuttle system, diversity of animals and plants, and the arts of Zion.

Zion NP had a deep religious background. In the early 1850s, Mormon missionary became the first white settlers of the Virgin River resulting from being dispatching from Salt Lake City by the Church of Jesus Christ of Latter Dy Saints. In order to know if this location could support their permanent residency, a Mormon named Nephi Johnson was designated to explore the canyon and render an agricultural report. Latter on, his favorable report brought several families to this area (Springdale) in the early 1860s. One of the them, Isaac Behunin, built the first cabin near today’s Zion Lodge and named the Zion Canyon.[6] Zion has a biblical meaning of “refuge or sanctuary” and a symbolization of Mormonism. As a result of eastern persecution, Mormons were driven into Utah to continue their cultural heritage and saw themselves as refugees.

Made a right turn at the Canyon Junction and passed several switchbacks, we arrived at the Zion-Mount Carmel Tunnel Highway. The tunnel was 1 mile long and constructed from 1927 to 1930.[7] During the busiest season, the tunnel allowed one way traffic so oversized vehicles can get through. However, oversized vehicles will be charged 15 bucks for one way traffic control service. Huge gallery windows are inside of the tunnel allowing visitors to have a spectacular view of the cliff. These windows were also served as important roles during construction period when crews were carving the tunnel, clearing the rocks from the interior, and providing lighting of the work area.[8]

The primary goal of implementing this project was to create a series of national parks linked Grand Canyon NP, Bryce Canyon NP, and Zion Canyon NP by rail or highway in south Utah to make the “Grand Loop” in reality. The completion of the Zion-Mount Carmel Tunnel Highway was a part of the “Grand Loop”.[8]

Angels Landing is on my “must-to-do” list for several years. Angels Landing received its name in 1916 when a group commented that only an angel could land on top of it. It is a 4.1 miles out&back and is rated as strenuous. People fear of heights are not recommended to take this trail. We started at Grotto Trailhead, followed the West Rim Trail, and passed through several switchbacks by the canyon wall to the Refrigerator Canyon. The temperature is very cool out there. Then we climbed 21 steep switchbacks (Walter’s Wiggles – Trail’s remark) where we gained the evaluation really quickly to the Scott’s lookout. This is the place that you will have a scenic view of Zion and decide if you want to tackle the most difficult half mile to the top. Please check the precise location of each point here. 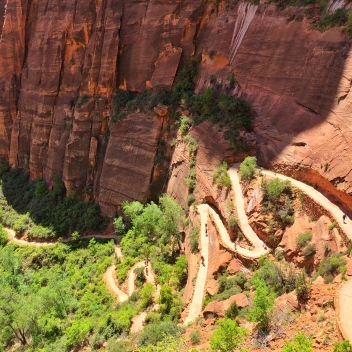 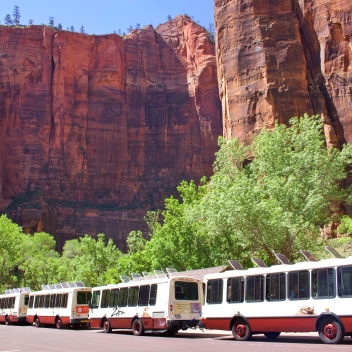 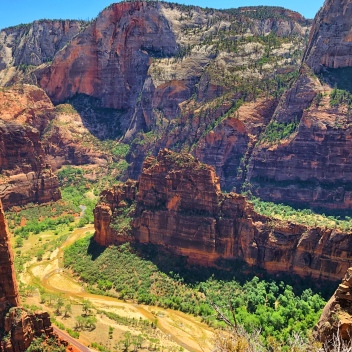 Narrows is not accessible if there is a flash flooding or the river is high from runoff. Canyon shoes, Neoprene socks, hiking poles, and dry suits are highly recommended. It’s easy to find a rental company around Visitor Center area or in Springdale. There are two ways to hike Narrows: Bottom Up and Top Down.

Top Down is a 16 miles strenuous hike usually takes at least one day. Starting Point is Chamberlain’s Ranch. Very impressive views if you hike all way down to the Temple of Sinawava. Permit required. Bottom Up was our option since we only planned to hike half day. No wilderness permit is required at this hike and it could be accessible almost all year. The following map marked the Bottom Up from Temple of Sinawava to Orderville Gulch. But actually you could still go up and reach the Big Springs. Check map here. 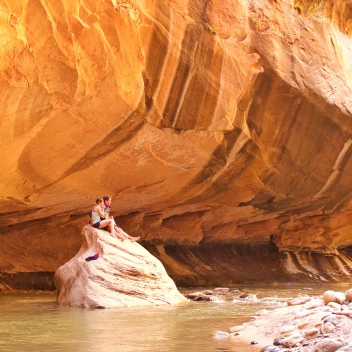 Zion is my favorite National Parks in North America and there’s no doubt I’ll revisit in the future. It’s such a beautiful place that it releases me from my busy work schedule completely. And it is a place that doesn’t need me do too much PS later on!