Glacier National Park, which is also called the “Crown of the Continent”, is located at northwest area in Montana. It’s on the US-Canada border and is a sister park to Waterton Lakes National Park in Canada. The visitation to Glacier NP has increased dramatically during the past 3 years, compared to the first time when it hit 1 million visitation in July 2017.[1] It’s probably because scientists have estimated all glaciers may disappear by 2030.[2]

Glacier Park International Airport (FCA) is the most accessible gateway to the park, which is located at the 6 miles northeast of Kalispell and between Whitefish and Columbia Falls. Five major airlines serve this area, including: Delta, American Airline, United, Alaska, and Allegiant. Another way to visit Glacier NP is to take Amtrek Empire Builder. The route connects Chicago and Seattle for 46 hours one way, which passes big sky country and stops at Essex Station for Glacier NP.[3]

The temperature can vary from 60-90 °F daytime to 40 °F nighttime. Area in higher altitudes may be much cooler. Snow can occur even in the summer. Sometimes, local residents said they had winters which lasted 9 months.[2]

There are three visitor centers in Glacier NP: Apgar, Logan Pass, and St. Mary. Each visitor center provides couple of ranger-led activities throughout the summer. Usually people consider the Logan Pass as the midway to divide the West and the East Glacier.

On the first day of our trip, we got up at 6am in the morning to make sure we can find a parking spot at Logan Pass. Logan Pass has been famous for being the highest elevation reachable by cars and having two of the most popular trails: the Hidden Lake trail and the Highline Trail. In peak season, the parking lot is usually full between 8:00am and 5:00pm. Alternative plans are available to avoid crowds, such as taking the free park shuttles, visiting early or late in the day, or touring with red bus. I also heard this area produced breathtaking views for sunrise, so many photographers would like to come here early to catch a shot.

Hidden Lake Trail is a 5.4 mile moderate hike begins at the back of Logan Pass Visitor Center. Only the first 2.8 mile was opened on that day, since beyond the overlook to the lakeshore was closed due to grizzly bears’ activities. The trail started as a paved surface, and then turned into uphill stairways. Just a few climbs, Clement Mountain appeared in our views. 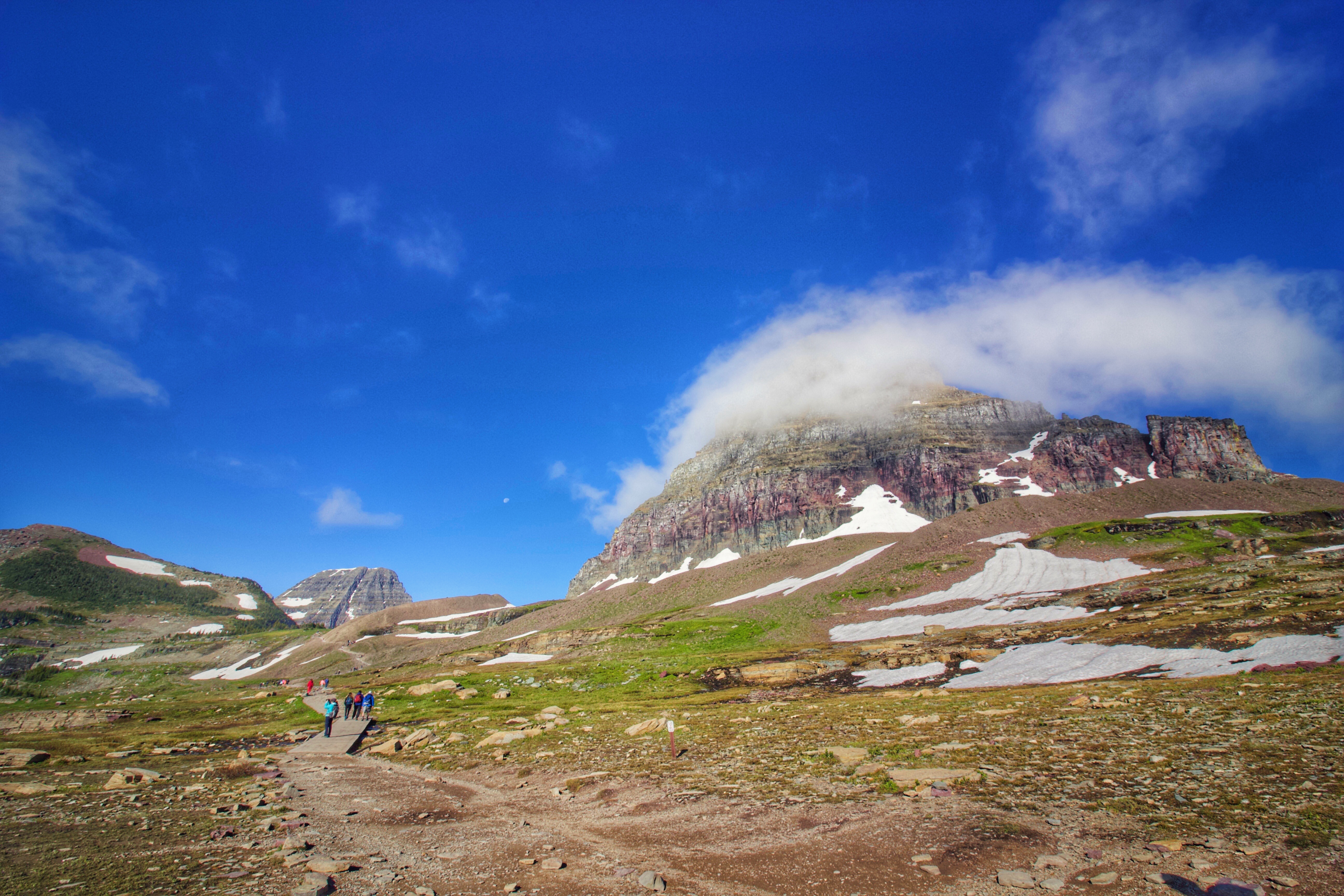 The Hidden Lake Overlook appeared at 1.35 mile, where the Bearhat Mountain dominated our views. 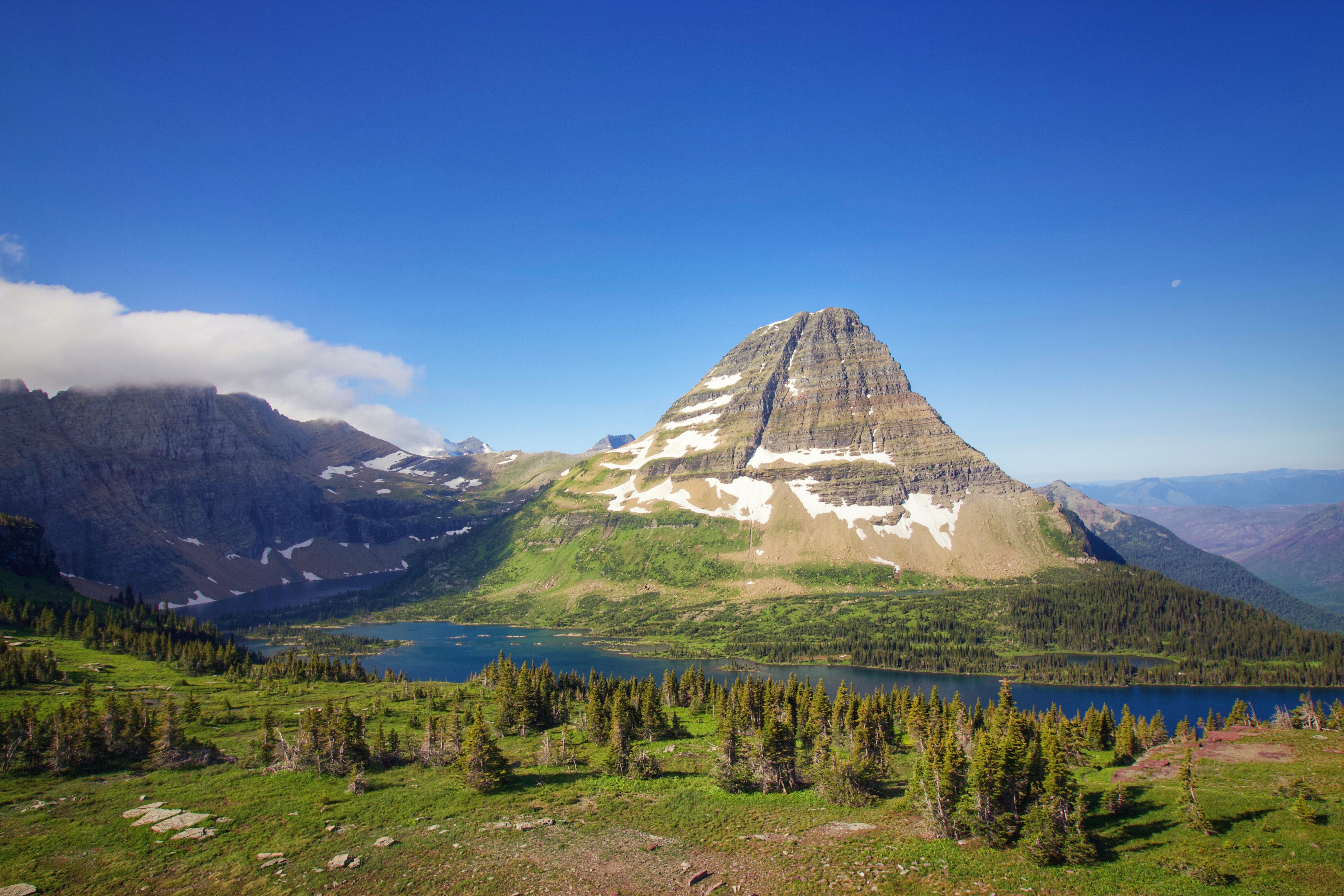 During this hike, we saw a mountain goat and a marmot. The mountain goats are the symbols of Glacier NP. They can easily scale steep cliffs which provides them protection from predators. Marmots spend most of their lives eating. An adult marmot can doubt its weight to store fat for winter hibernation. In hibernation, their hearts beat only a few times per minute and their body temperatures drop to just above freezing. 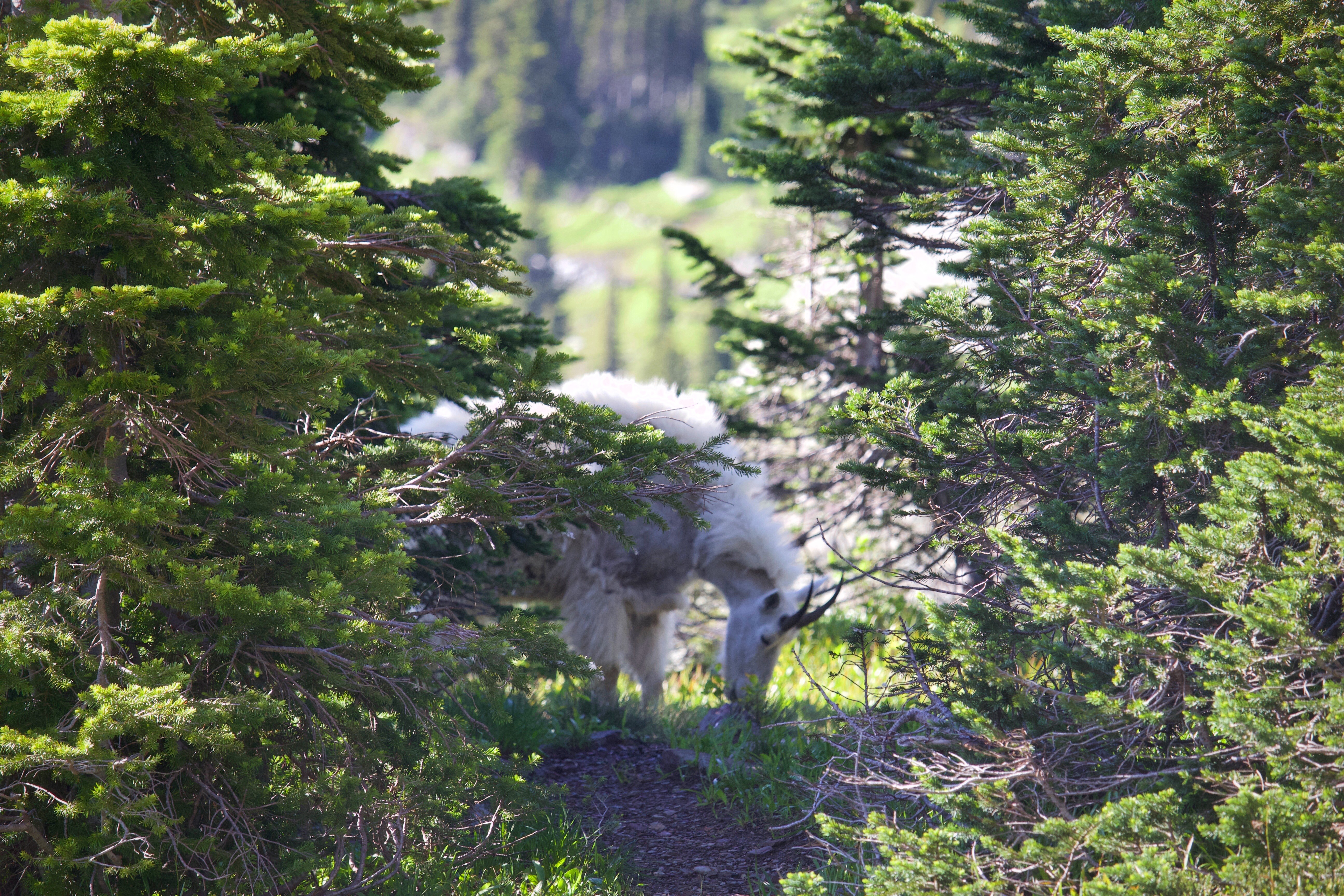 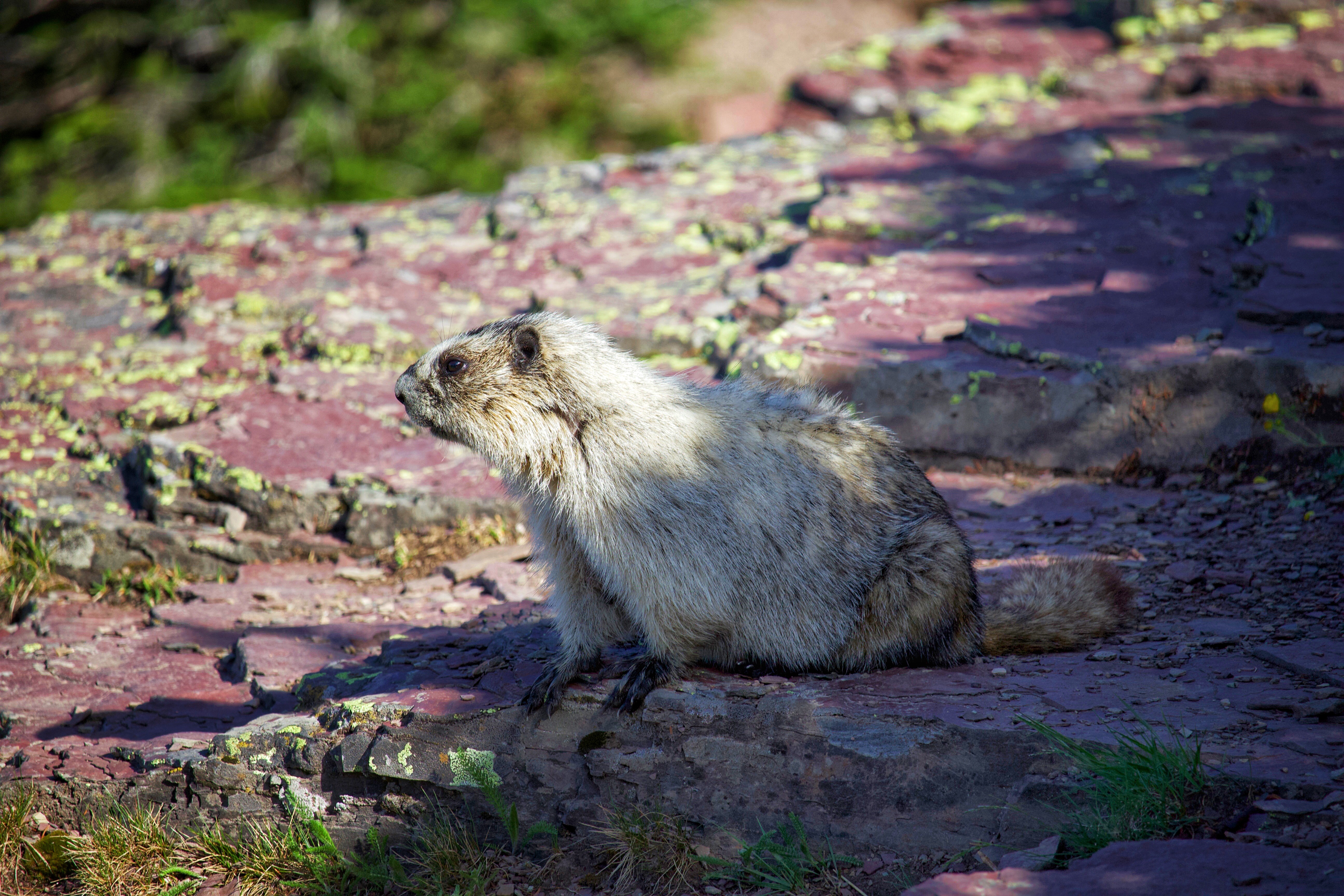 Highline Trail is a 11.4 mile one-way strenuous hike from Logan Pass to The Loop. This is an extremely popular hike as it follows the Continental Divide and offers spectacular views for alpine meadows and wildflowers. We just did the first 0.8 mile to save the energy for the next day hike. This section has a drop-off of ~100 feet down to the Going-to-the-sun Road and might deter visitors who have a fear of heights. The NPS has installed a hand cable along that stretch of the trail.[4]

In the early afternoon, we set off to the East Glacier. We stopped at the following points on the Going-to-the-sun Road.[5]

Going-to-the-sun Road is a roughly 50 miles mountain scenic road which spans the West Glacier and the East Glacier. The road typically fully opens in late June or early July. Parts of the road remain open throughout the year. Building Going-to-the-sun Road was a monumental 23-year undertaking. The construction began from the West Entrance to Apgar in 1911. The dedication of Going-to-the-sun Road marked the completion in 1933. On average, it cost $48,000/mile when it was built.[6]

In old times, Glacier NP was inhabited by Native American Tribes: the Salish, the Pendd’Oreille, and the Kootenai. In 1855, the leaders of tribes met with US officials to negotiate the Hellgate treaty. In the treaty, the tribes reserved certain portion of their territories and kept the rights to continue hunting, fishing, and gathering, while ceding the ownership of the majority of their territories to US. But misunderstanding of the treaty spread lately, including the boundary line of Flathead reservation. Tribe people still insisted the translators told the reservation extended to Canadian line in 1855. Nowadays, the east Blackfeet Reservation has roughly 8,000 Blackfeet people and the west Flathead Reservation has roughly 7,000 Salish and Kootenai people.[7]

On the second day, we took a boat and hike tour with Glacier Park Boat Company. It is a family owned tradition by Burch family since 1938 and now it has been passed on to the third generation.[8] The company offers multiple hike and boat tours in St. Mary Lake, Lake McDonald, Two Medicine, and Many Glacier areas. Check it out here!

We booked “Grinnell Glacier Boat and Hike”. This tour often becomes available from late July to mid September as it takes time to let snow melt on this trail. The trailhead is located at Many Glacier. Many Glacier is a hiking paradise and many hikers think this area should be the true Glacier National Park. Two popular hikes start from here: Grinnell Glacier Trail and Iceberg Lake Trail. Parking is limited, so the alternative is to take fee-based shuttle from St. Mary Visitor Center. The road to Many Glaciers is in bad condition, so you might need extra caution. 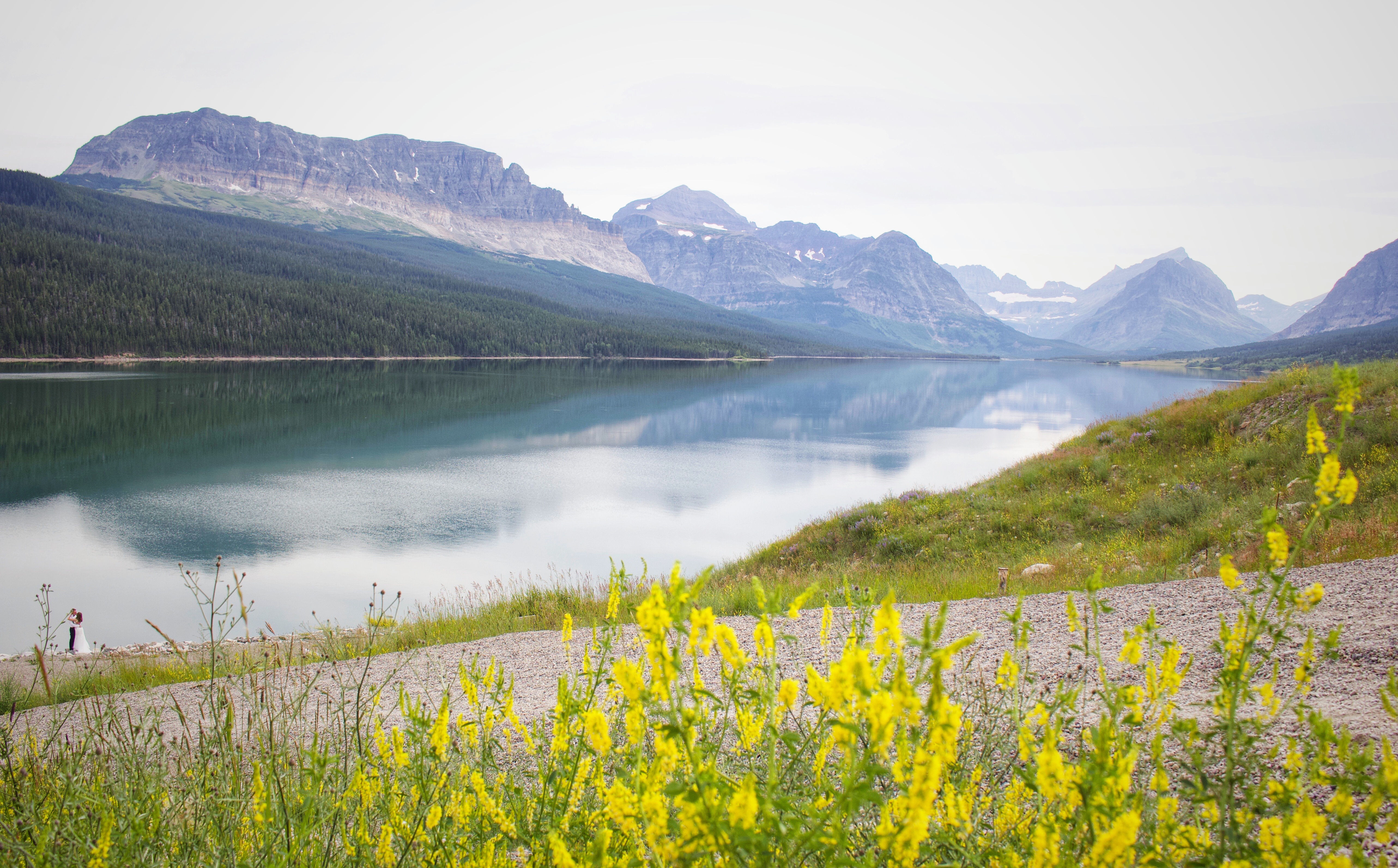 The tour started at 8:30am from Many Glacier Hotel. The boat rides (Express Boat + The Morning Eagle) across Swiftcurrent Lake and Lake Josephine shortened the total hike to roughly 8 miles.

The salamander glacier is the dominating feature from Lake Josephine and the early hike. As the elevation gains, Grinnell Falls, Grinnell Lake, Mt. Gould, and the Garden Wall become visible. 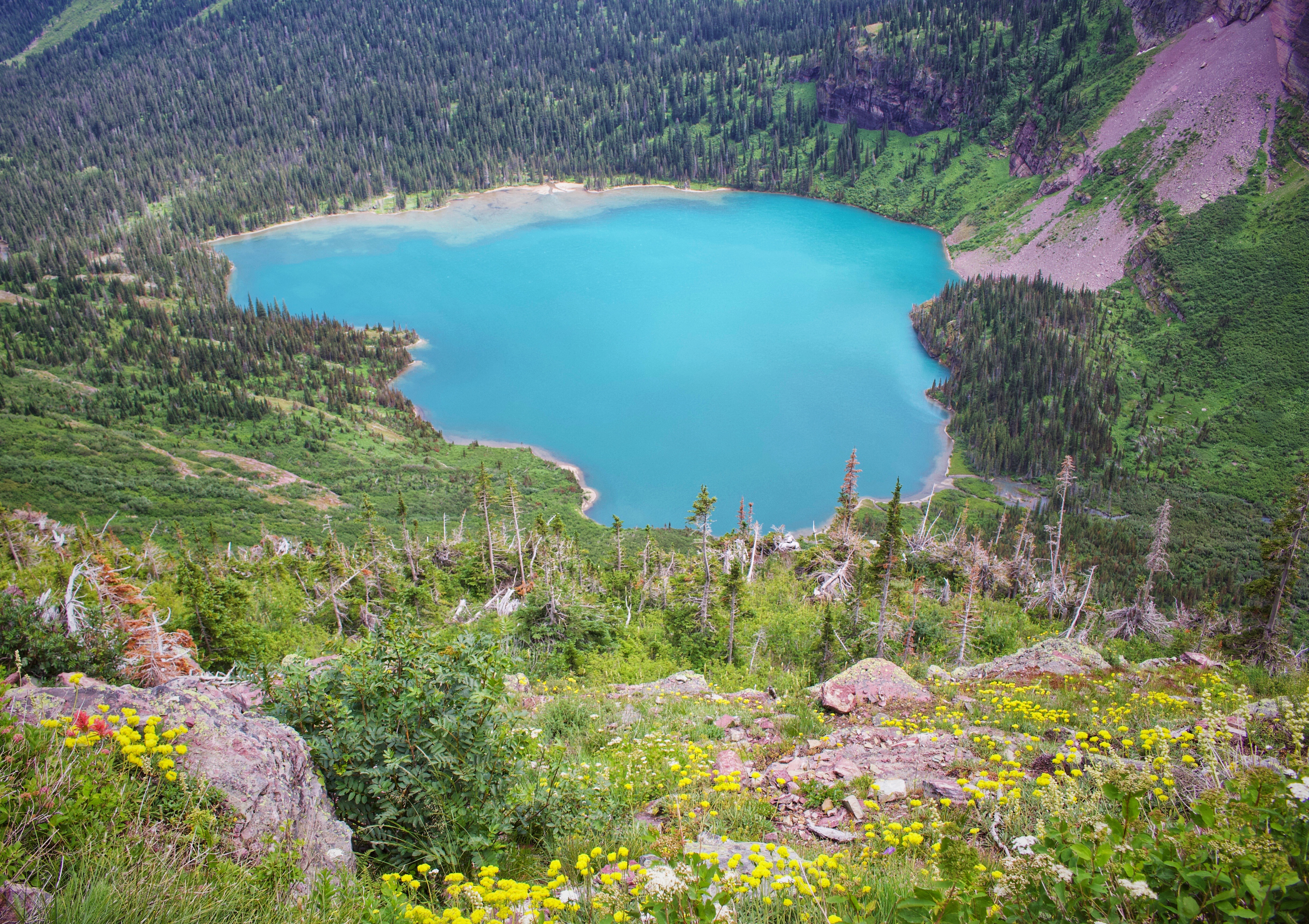 Finally we reached Grinnell Glacier Overlook and what we saw is breathtaking! The upper Grinnell Lake is surrounded by wildflowers, the Garden Wall at the north, and the 150-acre glacier. Unfortunately, we were told by the ranger that every glacier in the park is shrinking due to the climate change. Among ~150 glaciers in the park during Little Ice Age, only 25 active glaciers remained. The average glacier reduction is 39 percent.[9] The scientists also collaborated with early photographers to launch the Repeated Photograph Project, in order to track the changes by comparing images which were rephotographed from the exact same point.[10]

Well, not all snow which lays on the mountain called “Glacier” though. Glaciers must be at least 25 acres size, which means they must exceed a certain size to allow them to move under the impact of gravity. The accumulated snow compacts the bottom snow into ice, and the ice becomes so thick to move downhill.[11]

We’re also lucky to encounter a bighorn sheep besides the lake. They usually inhabit at alpine meadow or mountain slopes so you probably won’t see them in low elevation. Just like mountain goats, they can climb steep cliffs so this provides them protection from predators. 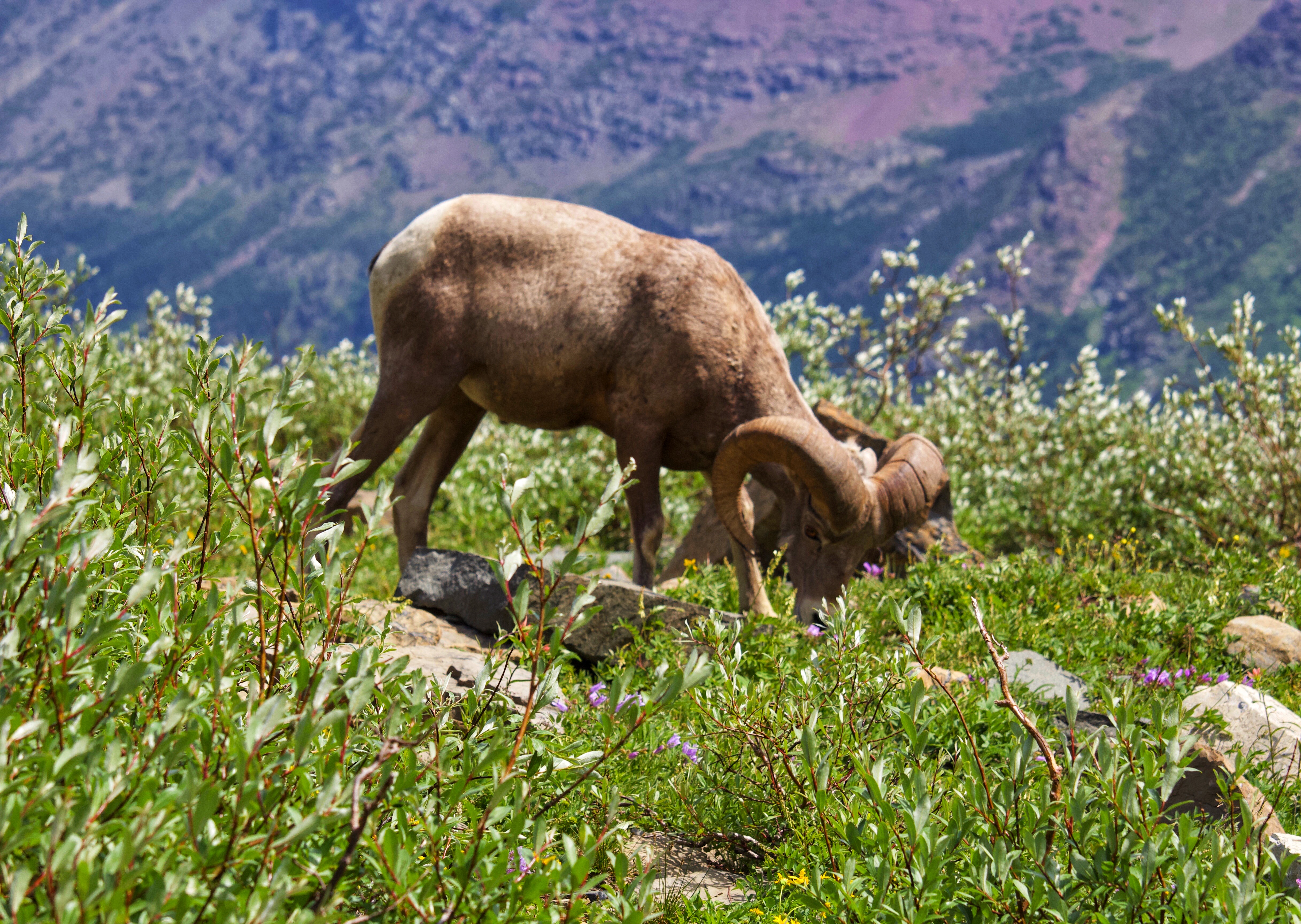 On our way back, we saw a grizzly bear at the lakeshore. Compared to Black Bears, the claws for Grizzly Bears are much larger and longer for the purpose of digging for roots and excavating the winter den. While for Black Bears, the relatively small claws are good at climbing trees and finding insects. 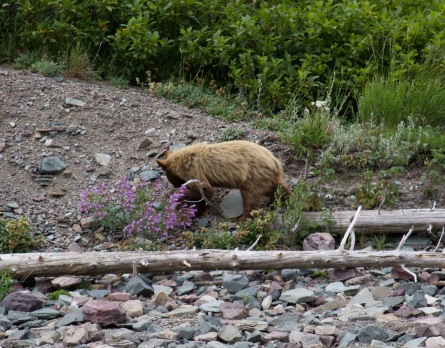 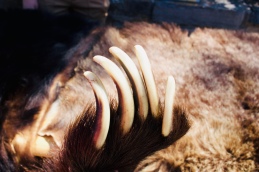 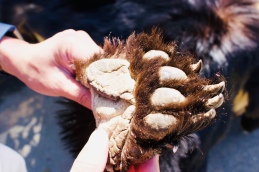 On the third day, we headed off to the West Glacier. We mainly stopped at the Trail of the Cedars, Lake McDonald, and Apgar Visitor Center. 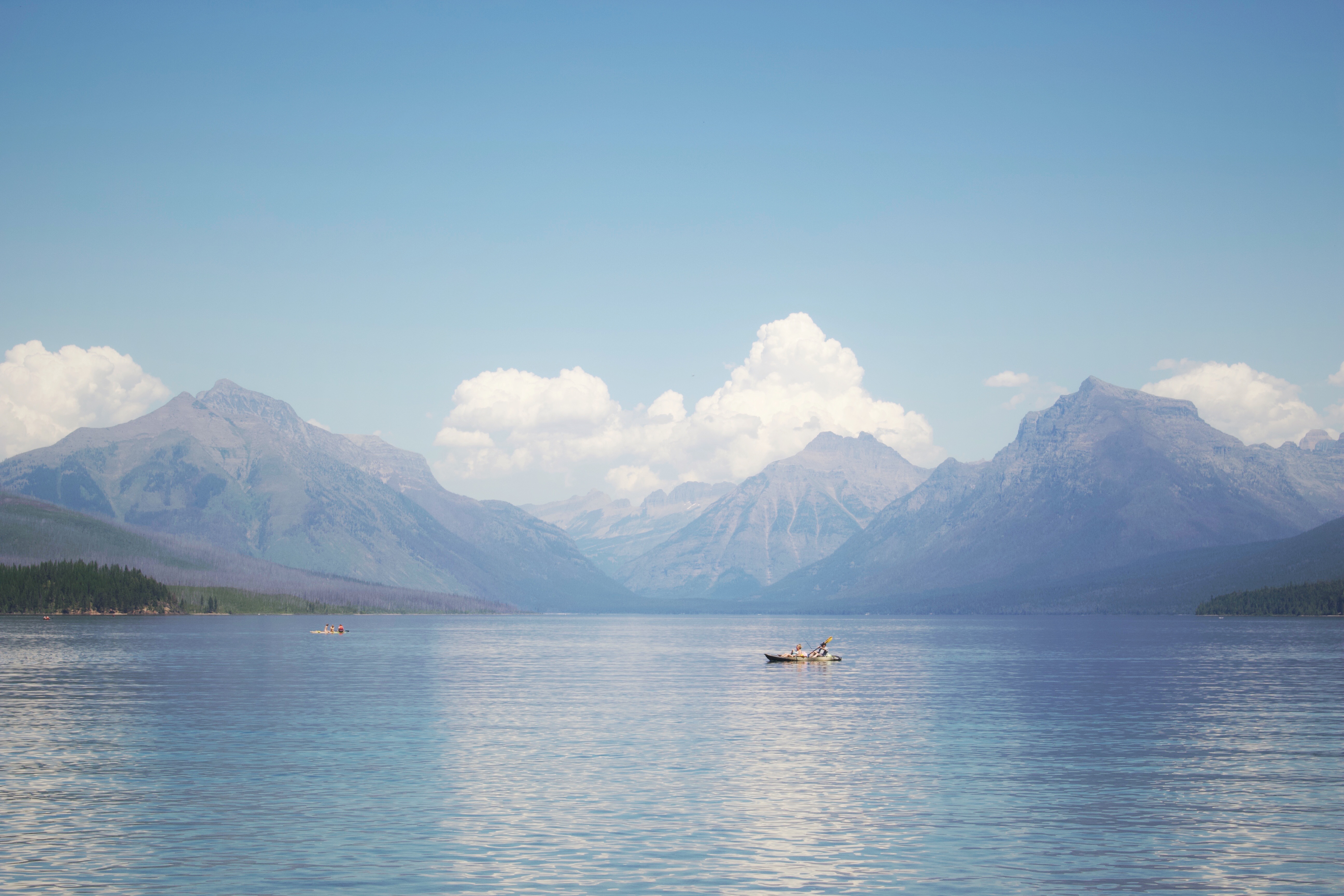 At Apgar Visitor Center, we participated in a ranger-led activity called “Trees Along the Trail”. The tour happened at 0.4 mile bike trail from Visitor Center to Apgar Village. The ranger shared some interesting stories about how National Park Service used fire to ensure a healthy ecosystem. I was surprised about this fact as I always believed fire is something needed to be avoided in the forest. For instance, Lodgepole Pine is one of the species that need fire to ensure the survival of that species. They have special cones which will release massive internal seeds when they are exposed to the heat of a fire. After the fire, even though those Lodgepole Pines are burned, but it creates a large amount of regeneration.[12] 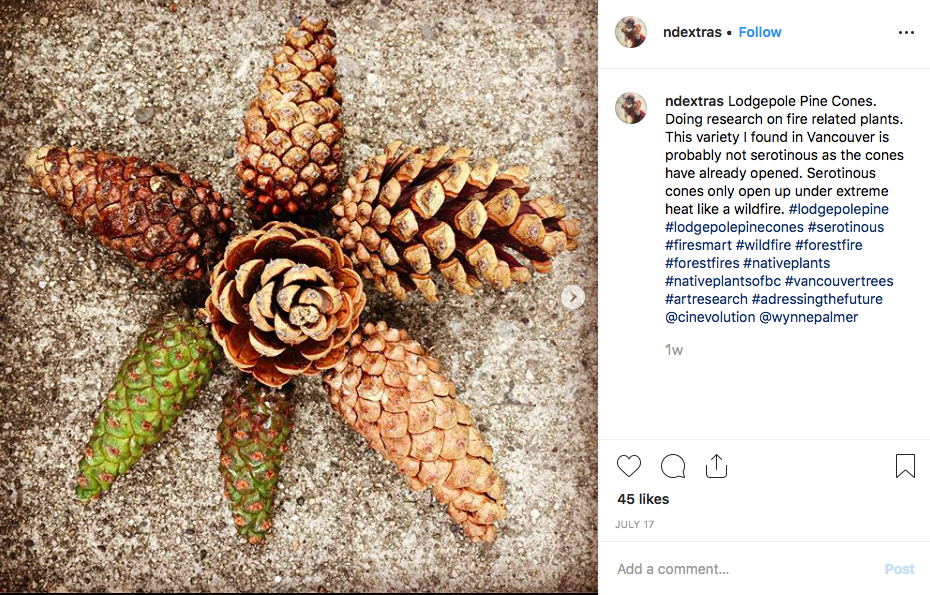 The Trail of Cedar is a 0.8 mile loop from Going-to-the-sun Road. In the middle of the trail, it splits into another trail to Avalanche Lake. The Trail of Cedar is famous for having some huge trees which are more than 500 years old. It also marks the eastern limits for certain Pacific trees such as Western Hemlock.

Lower Avalanche Gorge at the Trail of Cedar

The last day was a fishing day! And unluckily, we caught nothing! But, we really enjoyed it! We rent the fishing gears at Glacier Outfitters Company located at Apgar Village. In the morning, we went fishing at McDonald Creek and tried shore fishing at Lake McDonald in the early evening.

No permits are required to fish within Glacier National Park. The only thing to get is the fishing regulation from Ranger Stations or Visitor Centers. Faked lure is strongly recommended in the park. Some areas allow catching and releasing only. 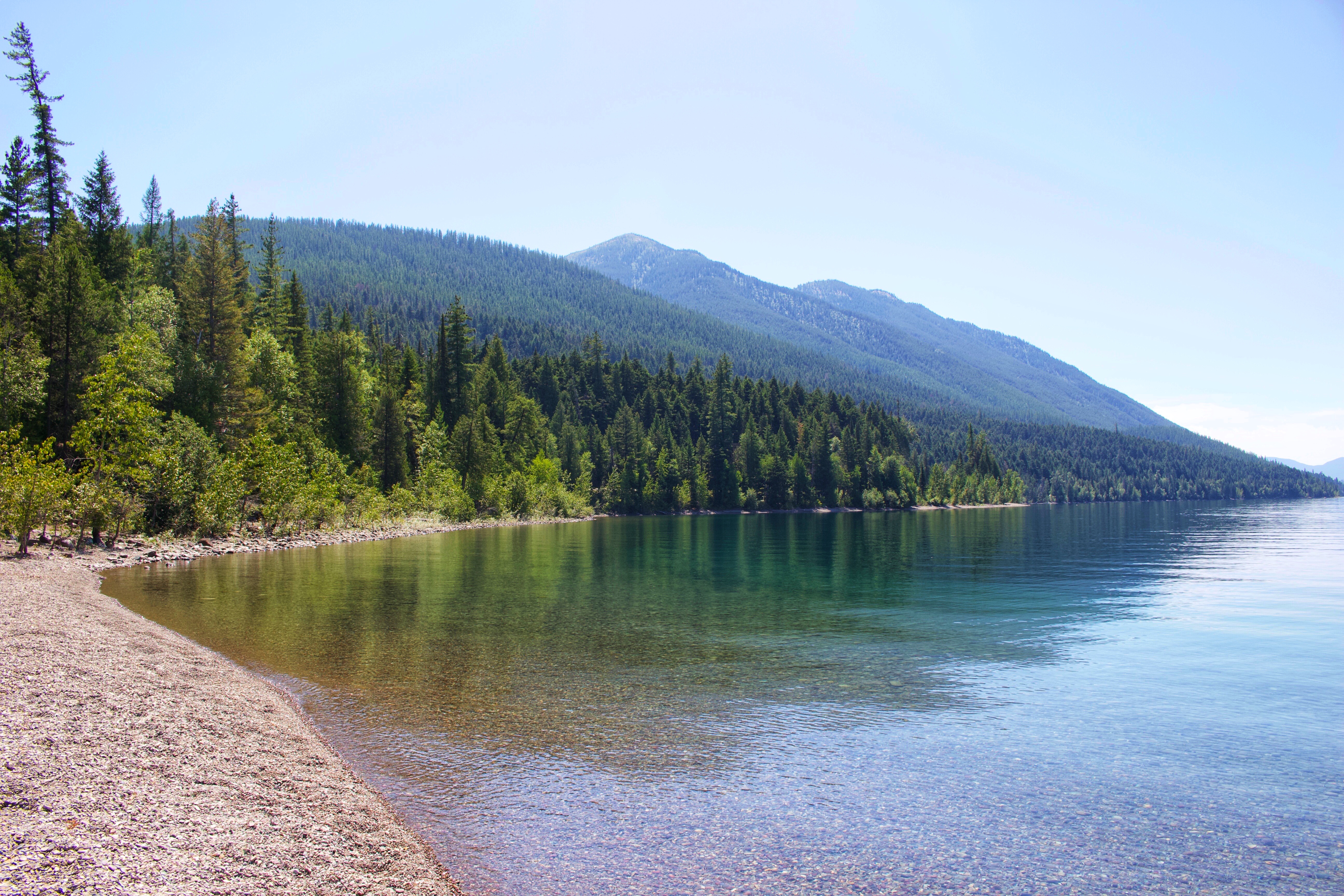 We also listened to a ranger talk in the Apgar Nature Center about Lake Trout and Bull Trout. In early days, NPS introduced some non-native fish species such as Lake Trout to Glacier National Park in order to enhance fishing. But due to the competition, that caused some native species such as Cutthroat Trout and Bull Trout to eliminate from several lakes. So fishing for Bull Trout is prohibited and if you catch any Bull Trout, you’re required to release them immediately. You can still catch Cutthroat Trout, but you can only keep two. For more regulations, please check here!